Pack up your Spanish language skill and visit a country on our list of Spanish-speaking countries!

Spain
Spain is first on our list of Spanish-speaking countries. Basque, Galician, Catalan and Valencian are also official languages. Castilian Spanish is less formal than the Spanish of other countries. For example, the word usted is used much less in Spain. That means there is one less conjugation to worry about when experiencing Spain!

Mexico
Mexico has the largest Spanish-speaking population in the world. They also have over 60 indigenous languages. In fact, Mexican Spanish contains many words from the Nahuatl language which aren’t in use outside of Mexico. American English words have also crept into Mexican Spanish, like the word “hot dog.” Watch some Youtube videos or other resources about Mexican Spanish before you visit!

Argentina, Uruguay, Eastern Bolivia and Paraguay
The South American peoples of Argentina, Uruguay and Eastern Bolivia speak the same dialect of Spanish. It is called River Plate Spanish. Paraguayan Spanish shares many characteristics with this dialect, too. This accent may be hard to understand because it has an Italian intonation. Italian immigrants had a great influence on the language of the area. They even use some Italian words in this dialect of Spanish. This Spanish-speaking region uses the pronoun vos instead of tú. Make sure to practice your conjugations before taking off!

Chile
Chilean Spanish is very similar to Argentine Spanish. They also use vos here instead of tú for conversations in close relationships. However, foreigners are warned not to use this pronoun in Spanish in Chile until they’re familiar with it. It is easy to cause offense and insult by misusing pronouns here. 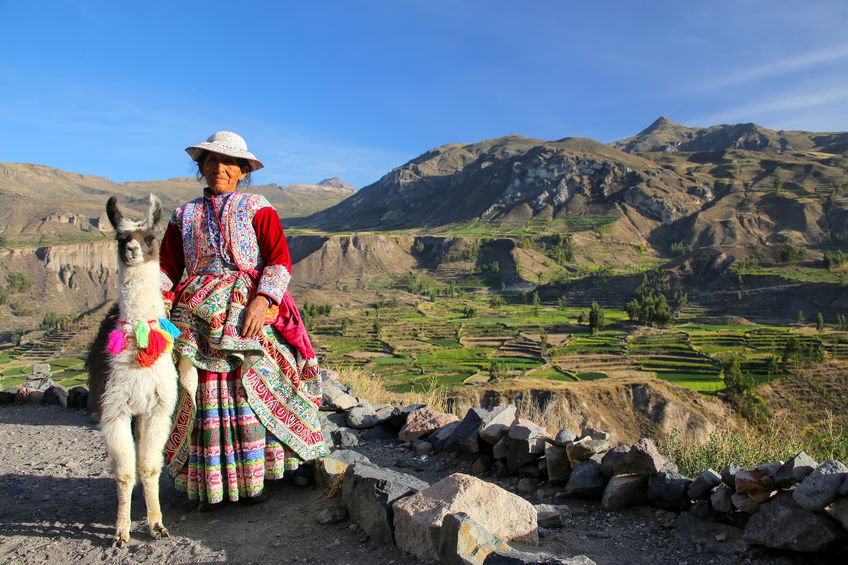 A woman and a llama wear traditional Chilean textiles.

Peru, Colombia, Ecuador, Western Bolivia and Andean Venezuela
If you keep your vacation in the coastal zone of these countries, you’ll be able to practice your Spanish easily. Lima was the capital of the Spanish Empire for 200 years, so Peruvian Spanish is considered very “pure.” Where Peru, Ecuador, Bolivia, Venezuela and Columbia touch the Andes mountains, indigenous languages such as Quechua influence the Spanish dialect. Here, people are friendly and exchange Spanish greetings with strangers.

Equatorial Guinea
So far, this list of Spanish-speaking countries only includes countries in the Western Hemisphere. However, Equatorial Guinea also speaks Spanish as their official language. The Spanish spoken here is the closest to Castilian Spanish. If you studied at a language school in Spain, you should have no problem. Keep your eye open for small differences, like the use of ustedes. They also skip using the articles here!