Even while reaping the Spanish learning benefits, there are still some dangerous habits to avoid while studying Spanish in Spain. After all, you can’t simply move to Spain and learn by osmosis!

Spanish is said to be an easy language to learn, especially with the similarities to English. However, it still takes dedication, focus, and most of all, new language learning habits to learn. You don’t have to rearrange your whole life, but make sure to be vigilant of these 5 habits to avoid while studying Spanish if you want to become fluent quickly.

5 habits to avoid while studying Spanish

Everyone learns languages differently. Our Spanish-learning habits will all be different, as well! How you learn Spanish best is up to you (and whichever school is right for you) – but there are some things that just aren’t helping. These are the most dangerous habits to avoid while studying Spanish; stay away at all costs!

Just because there are people who speak English in your class doesn’t mean you should speak English with them. Every time you speak English, you lose a chance to become more comfortable in your conversing skills. Speaking English with shopkeepers or bartenders is even worse – one of the worst habits to avoid while studying Spanish! Locals are a goldmine of new vocabulary, especially slang words. While it might be uncomfortable at first, try to always speak Spanish. Not only will you learn more, you’ll get in the habit of speaking Spanish as a default. 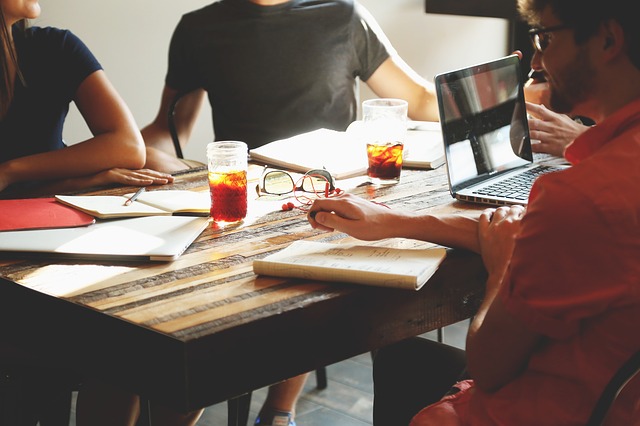 Always take a notebook with you if you’re going to a language exchange.

2. Not keeping a notebook on you

While you’re out speaking to locals (see #1), you’ll hear plenty of new words, phrases, and expressions. Don’t let them slip away! Keep a small notebook or use the notes application on your smartphone to jot new words down. You’re also likely to be corrected in Spanish at times, so keeping track of the correction will save you from making the same mistake again.

3. Only studying in class

Taking a Spanish class in Spain is a great start to learning Spanish. However, it’s just that – a start! Spanish courses are designed to teach you Spanish but not without your effort. To make sure you’re fully understanding the lessons, make sure to read over your notes at home. You don’t have to sit behind a book the whole time you’re in Spain, but not studying at all is a BIG mistake. Don’t let your Spanish lessons come in one ear and slip out the other!

Try to find online quizzes and games for the concepts that are hardest for you.

4. Neglecting skills that you struggle with

Struggling with a subject is never fun, but avoiding it is even worse. If you don’t take the time to understand the topic that’s troubling you, you’ll never be able to use it! Spanish concepts do get tricky, like with ser and estar or the difficult verb gustar. Ask your teacher for more clarification or search more resources about it on the internet. Don’t exclude it from your Spanish lexicon! Instead, make sure this is one of the habits to avoid while studying Spanish.

While you’re learning Spanish in Spain, you’ll be surrounded by Spanish media. Don’t let it go to waste! Reading Spanish books, listening to Spanish podcasts, and watching Spanish series will boost your Spanish level quickly. You’ll be exposed to the Spanish language in an entertaining way, so your brain won’t even feel like it’s studying. Checking out Spanish media will also help you get a better understanding of the culture!

Are there any bad habits we missed? Comment below!