When are the Mealtimes in Spain?

The daily rhythm in Spain is quite unique and it relies on the mealtimes in Spain. You may think you’re all settled in after you get your NIE but getting on time with Spanish mealtimes is vital. Spanish people are known for being laid-back but they keep their meals on a tight schedule. If you want to get used to Spanish life, eating at the right times is the first step. Missing the mealtimes in Spain means you’ll be stuck eating overpriced tourist food because all the other restaurants are closed. Keep reading to find out what Spanish food to eat at which time.

Desayuno means breakfast in Spanish, although some Spaniards never need to say it. Breakfast in Spain is a short and often sweet snack that may be grabbed on the way out the door (or not at all). Many Spaniards skip the meal and save their hunger for the next meal, the almuerzo. It is typical to stop at a cafe for something starchy, like a croissant, toasted baguette or churros. Wash down your breakfast with cafe con leche or fresh orange juice (commonly from the Valencia orange). 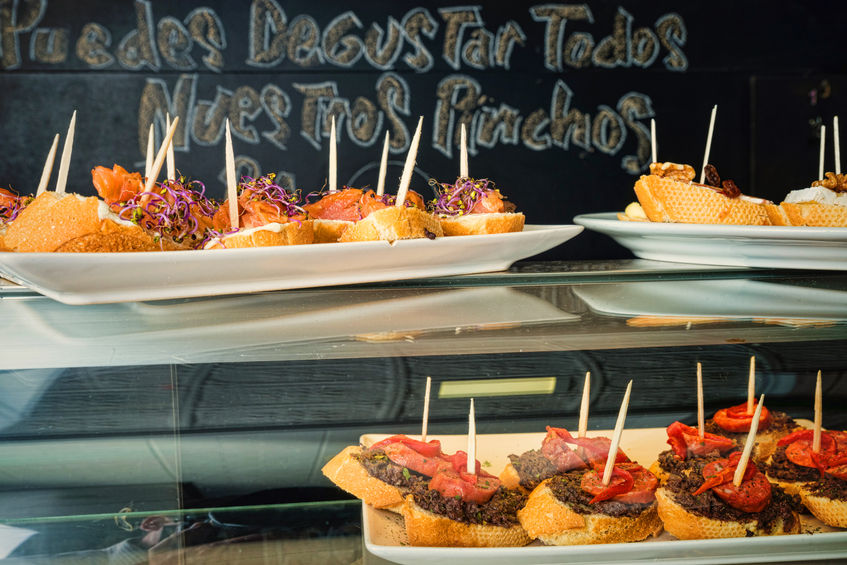 These pinchos are most often served at dinnertime but they make a good snack as well.

Almuerzo has a special meaning in Spain: the mid-morning snack. In other Spanish-speaking countries, it means lunch. However, almuerzo in Spain is taken to tide people over until their late lunch. This snacktime in Spain usually consists of a sandwich or bocadillo, especially one filled with a slice of tortilla de patatas.

La Comida or lunch in English is the most important of all the mealtimes in Spain. Many restaurants and cafeterias don’t open until two in the afternoon but you might find a few open from 13:30. Lunch in Spain is often made up of a few courses such as an appetizer, main course and dessert all for one price under the menu del dia. Remember that it’s perfectly acceptable to take a siesta after the biggest meal of the day.

La Merienda is another Spanish meal that is designed to tide you over until the next meal. This is the late-afternoon snack that gives Spaniards a chance to take a break, take a bite and get some energy. Sweets and pastries are most commonly eaten during the merienda but small sandwiches with cured meats are also available.

La Cena means dinnertime in Spain. It also means tapas time! Contrary to dinner in other countries, Spanish dinner is light. As is the custom when eating tapas, a few plates are ordered and shared amongst friends or family. This is another one of the mealtimes in Spain that can start and last quite late. On weekends, dinner isn’t typically taken before ten in the evening! Relax, eat your meals a bit later and get on the Spanish rhythm! 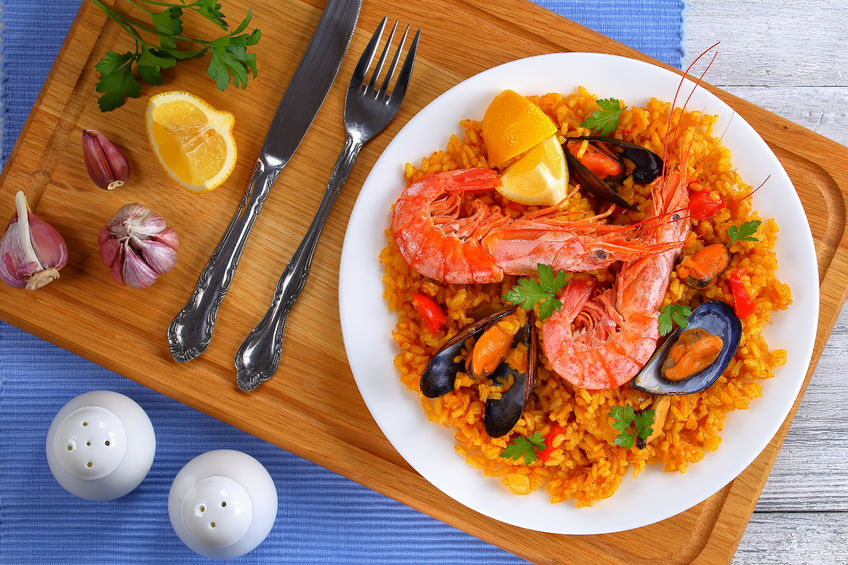 Although many people assume it’s a dinner food, paella more often eaten for lunch in Spain!